It’s All About God

It’s All About God 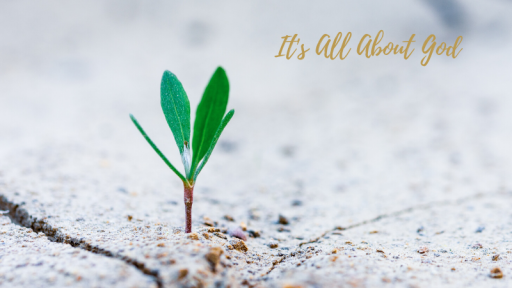 For the foolishness of God is wiser than man’s wisdom… ~ I Corinthians 1:25a

I trained our launch team in how to go door-to-door calling. I taught them how to make a good first impression and ways to smoothly steer the conversation toward spiritual matters.

After modeling our first contact for a block or so, everyone on the launch team got a turn. After each home I would make some comments to reinforce a key point and encourage the team member.

Then it was her turn. She was bold and enthusiastic but seemed too often to just not “get it.” As we approached the next house, I repeated my instructions one last time.

She knocked on the door, and I shut up and prayed. The door was opened by a young woman. “Do you want to have a Bible study?” I cringed inside.

Yes, we were trying to set up Bible studies, but she had forgotten everything I said.

I hoped God would not be too grieved that an actual family had such a poor invitation, that he would understand that part of our task was also to disciple people like her.

“Yes.” With an equally direct answer, the young woman standing behind the door reminded me that Christ’s efforts to build his church did not rely on my script or my smooth words.

As Paul wrote the Corinthians, “Neither he who plants nor he who waters is anything, but only God, who makes things grow.”

The Bible study in that home in the weeks that followed produced our new church’s first worship leader, the husband of the young woman who had answered the door.

And today, She-Who-I-Thought-Muffed-It is one of the most influential leaders at her home church.

Father, Teach me to love and appreciate my brothers and sisters as you love them and have uniquely prepared each of them. Amen.