Skip to content
The Power to Break Lies - In North America 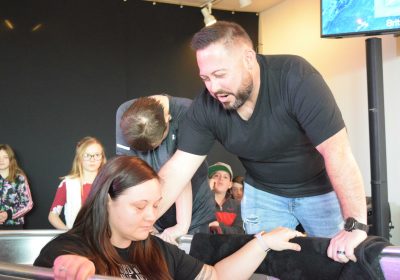 Greeting in the Name of our Beloved Jesus!

Jesus has power to break lies that people have believed for generations!

Movement Church launched early last year in Tipp City, Ohio, USA, meeting in living rooms and around fire pits throughout their community. When COVID began, they kept meeting in parks and on patios, and they added Zoom meetings to include more people. This unique beginning expanded their reach to places where they could not have gone otherwise.

One woman in their community named Tiffany consistently invited her friend Brittany. Brittany had no desire to be a part of the church. Her parents had been hurt by a church once, and they had passed down that skepticism to Brittany.

Brittany believed lies about what church was like and had decided being a Christian wasn’t for her. But, after relentless invitations, Brittany agreed to attend one service as long as Tiffany would stop bugging her to come.

Brittany had built up her walls about church, and she intentionally avoided connecting with people that first Sunday. But what she didn’t plan on was her son Parker loving the children’s ministry!

Parker asked his mom to take him to church again. During that second week, Brittany experienced God’s love that broke down her walls.

Jesus’ power broke the lies that her family had been believing for generations, and Brittany found a community that was nothing like what she always believed about church. The more she interacted with the church’s leaders and small groups, the more her faith grew. She eventually gave her life to Jesus and got to lead her son Parker to salvation, as well!

After learning about baptism, both Brittney and Parker got baptized, and her parents, who had previously been hurt by a church, were there to witness it.

Today, Brittany’s fire for Jesus burns hotter than ever! She continues to invite all of her loved ones to church, and she plans on leading a small group in a few months.

Isn’t it incredible how Jesus can break the power of lies that families have believed for generations?!

Join us in paying for the next generation to believe in Jesus and be powerfully used by God to build His church.