Skip to content
Refugees Receive Hope in the Gospel [Story] 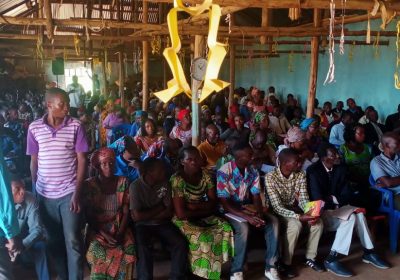 Bringing the Hope of the Gospel to Refugees

widow, but he frustrates the ways of the wicked.

Survivors of civil wars and genocides from Rwanda, Congo, Burundi, and South Sudan  currently live in refugee camps in northwestern Uganda. There are 1,500,000* residents – similar to the size of Las Vegas, Nevada. Most of them have been living in this massive refugee camp for at least 8 years. Each day, they face abject poverty and despair. Each day, they are triggered by traumatic memories of murder and war. Each day, they live alongside people from opposing parties, feeling afraid of and angry at their neighbors because of the killing and loss they have all seen back home.

Each of these precious souls are people God loves, hurting people that Jesus died to save. Each of them needs the healing love of Jesus to restore life and hope among them.

But there were no pastors to give hope…

Refugee pastors were too broken. Instead of being able to care for their hurting refugee neighbors, the pastors among them were equally disheartened. Painful memories haunted their thoughts. They wrestled with guilt, struggled through emotional exhaustion, and barely coped with day-to-day survival. Most survivor pastors had walked away from their ministry.

But God called a DCPI trained Kenyan pastor named Nicodemus to go in from the outside and minister among these refugees. His team are hope-bringers to the refugee pastors and their neighbors. Spiritually, they are refocusing the pastors on the grace and power of sharing the gospel. Physically, they are meeting practical needs for items such as food, soap, bus tickets and farming supplies.

“The Pastors and church leaders flock in from every angle of the camp. Some walk 12-15 kilometers (7 to 9 miles) to arrive for a gathering.

They’re very excited and attentive. They are listening to Pastors who have congregations and know Pastors’ challenges. They want help in solving their wrangles against one another. Only God can reach deep into these wounded souls…  When they sing it is from the depth of their hearts.”

Nicodemus is mentoring a young couple we’ll call John and  Mary. John is from Congo. He is the son of a pastor but he and his mother ended up in the camp separated from the rest of his family. John and Mary married after meeting in the camp and bonding over their Christian faith. Nicodemus has been helping them grow in God’s strength and practical applications for leading their new house church.

Since Pastor Nicodemus is also a bi-vocational minister as a teacher of agriculture and theology, and John also has a degree in agriculture, Nicodemus is mentoring John to serve his neighbors by starting a new home prayer and Bible meeting as well as a farm. A piglet and seeds are growing into a pig and produce farm for the community, while the neighbors are growing into disciples of Jesus.

Until the Whole World Knows Jesus.